Skip to content
Questions or enquiries? Call us today 0412 900 009 | Register or log inSubscribe for 10% off your first order
Sale!

The Oricom Babysense7 Breathing Movement Monitor is designed to monitor baby’s breathing movements and sounds an alarm to alert the carer should baby’s breathing become irregular or distressed before it becomes critical.

The Babysense7 consists of two sensor sections that fit securely underneath the mattress. No part of the device ever comes in immediate contact with the child. The sensors are attached to a small battery powered control unit which may be attached to the side of the baby’s cot or bassinet or positioned on a close flat surface.

Included as a medical device on the Australian Register of Therapeutic Goods the Babysense7 is an integrated system with a control unit connecting to sensor pads which are placed under your baby’s mattress.

The Babysense7 is battery operated so there is no power source in or around the cot.

Babysense7 is an additional aid to the normal precautions taken by families in the care of their infant. 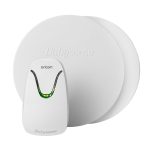